What's In A Name?

Why is it still an uphill battle to convince people that fluorescent lights are not evil? Commercial lighting is no problem, but even in this new era of energy consciousness, suggesting a fluorescent decorative fixture almost always gets a negative first reaction. My explanations usually go a long way toward swaying them, but it's a time consuming process and one that shouldn't be necessary anymore.

What's wrong with fluorescent lighting? The short answer is: nothing. The longer answer is: a few small things, mostly technical, and one very large item: perception.

Fluorescent lighting has come a long way from high school classrooms and motor vehicle offices. Those of us involved in lighting know that. Better flicker rates, no noise, pleasing colors, instant start, dimming, huge varieties of bulb sizes. But the public, for the most part, doesn't know it. For most consumers there is an automatic presumption that fluorescent lighting is "bad." Fluorescents are still equated with several seconds of flickering light followed by that harsh green cast in those masonite paneled basements of our childhoods 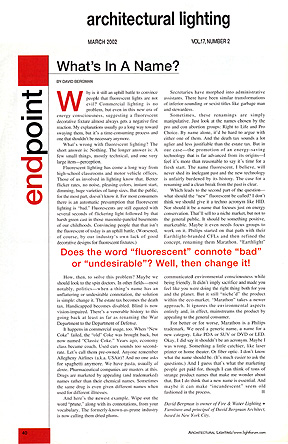 . Convincing people that isn't the fluorescent of today is an uphill battle. (Worsened, of course, by our industry's own lack of good decorative designs for fluorescent fixtures.)

How, then, to solve this problem? Maybe we should look to the spin doctors. In other fields  most notably, politics  when a thing's name has a unflattering or undesired connotation, the solution is simple: change it. The estate tax becomes the death tax. Handicapped becomes disabled, blind is now vision impaired. There's a venerable history to this going back at least as far as renaming the War Department to the Department of Defense.

It happens in commercial usage, too. When "New Coke" failed, the "old" coke was brought back, but now named "Classic Coke." Years ago, economy class became coach. Used cars sounds too second rate. Let's call them pre-owned. Anyone remember Allegheny Airlines (a.k.a. USAir)? And no one asks for spaghetti anymore. We have pasta, usually al dente. Pharmaceutical companies are masters at this. Drugs are marketed by appealing (and trademarked) names rather than their chemical names. Sometimes the same drug is even given different names when used for different illnesses.

And here's the newest example. Wipe out the word "prune," along with its connotations, from your vocabulary. The formerly-known-as-prune industry is now calling them dried plums.

Secretaries have morphed into administrative assistants. There've been similar transformations of inferior sounding or sexist titles like garbage man and stewardess. Sometimes, these renamings are simply manipulative. Just look at the names chosen by the pro and con abortion groups: Right to Life and Pro Choice. By name alone, it'd be hard to argue with either one of them. And the death tax sounds a lot uglier and less justifiable than the estate tax. But in our case  the promotion of an energy saving technology which is far advanced from its origins  I feel it's more than reasonable to say it's time for a fresh start. The name fluorescent, I believe, will never shed its inelegant past, and the new technology is unfairly burdened by its history. The case for a renaming and a clean break from the past is clear.

Which leads to the second part of the question  what should the "new" fluorescent be called? I don't think we should give it a techno acronym like HID. Nor should it be a name that focuses just on energy conservation. That'll sell to a niche market, but not to the general public. It should be something positive, marketable. Maybe it even needs focus groups to work on it. Philips started on that path with their Earthlight branded CFL's and then refined the concept, renaming them to Marathon. "Earthlight" communicated environmental consciousness while being friendly. It didn't imply sacrifice and made you feel like you were doing the right thing both for you and the planet. But it still "niche'd" the product within the eco-market. "Marathon" takes a newer approach. It ignores the environmental aspects entirely and, in effect, mainstreams the product by appealing to the general consumer.

For better or for worse, Marathon is a Philips trademark. We need a generic name, a name for a new category. Like PDA or SUV or DVD or LED. Okay, I did say it shouldn't be an acronym. Maybe I was wrong. Something a little catchier, like laser printer or home theater. Or fiberoptic. I don't know what the name should be. (It's much easier to ask the questions.) And I guess that's what the marketing people get paid for, though I can think of tons of strange product names that make me wonder about that. But I do think that a new name is essential. And maybe it can make "incandescent" seem old fashioned in the process.